They come in three sizes:

Please note that as Cinnamon Wood is a natural product, sizes and shapes will vary.

All dogs need to chew. But sometimes, especially when they are young puppies, they direct their attention to things they shouldn’t! Chair and table legs, along with shoes are fair game in their eyes!

You can discourage them from your best furniture with something like Vicks Vapour Rub. When you catch them attempting to sink their teeth into something they shouldn’t, then attract their attention with a Cinnamuncher Cinnamon Wood Chew. The delicious smell of cinnamon will encourage them to chomp on them instead.

Satisfy your dog’s need to chew with this healthy option:

Cinnamon not only has a great flavour, a main benefit is its anti-inflammatory properties. It can also help reduce the risk of diabetes by raising insulin resistance and helping to regulate blood sugar.

It also helps with the yeast infections that can cause skin allergies.

Every dog has a natural need to chew. This often starts when they are puppies and progresses to chewing our table legs and shoes! Chewing gives natural dental care and occupies the energetic dog. The Cinnamuncher’s Ceylon Cinnamon Wood Chews are a sustainable dog chew made using real, natural wood to satisfy their chewing instincts.

Cinnamomum Verum or ‘True’ Cinnamon is a tree native to Sri Lanka, the island nation that was once known as Ceylon. The bark of the tree is used to make true Cinnamon also known as Cinnamomum Zeylanicum. Carefully selected and repurposed wood is then simply graded, dried, and sanded, making these a healthy, safe and satisfying chew for dogs of all sizes. As a natural wood product, it will chew down but does not produce sharp splinters.

It’s important for you to know:

Note that there are two types of Cinnamon:

It is important that you do not allow your dog to chew for long periods of time on these Ceylon Cinnamon Wood Chews. Too much Cinnamon can be harmful, but the small amount consumed in normal chewing is fine. We would recommend a maximum chew time in any one day of no more than an hour – less for smaller dogs. If in doubt, always consult with your vet.

What do these figures mean?

Why dogs need to chew. 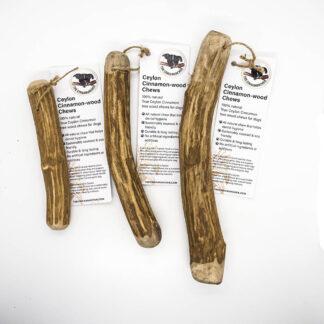 You're viewing: Ceylon Cinnamon Wood Chew £9.00 – £14.00
Select options
New!
We use cookies on our website to give you the most relevant experience by remembering your preferences and repeat visits. By clicking “Accept All”, you consent to the use of ALL the cookies. However, you may visit "Cookie Settings" to provide a controlled consent.
Cookie SettingsAccept All
Manage consent